Slutbucks, Serpent Towers, and the Myth of Melusine


It would appear that Starbucks shares my fascination with ophidian goddesses. And, at least one Christian group is up in arms over their display of reptilian tails.

The logo comes from an old sixteenth-century Norse woodcut and features a bare-chested woman with a mermaid-style fish tail that is split in half.

The Resistance, a Christian activist group based in San Diego, says the woman looks like a prostitute and suggests the firm should be calling itself “Slutbucks” instead.

"The Starbucks logo has a naked woman on it with her legs spread like a prostitute," said Mr Dice.

"The woman is actually a siren, not a mermaid, which in Greek mythology lures people to them with their beautiful songs, and then kills them," said Mr Dice.

Mr. Dice is close. The image is associated with siren mythology, but to be specific, she is Melusine. She is, in fact, half serpent. Be afraid, Mr. Dice. Be very afraid.

There are a few different versions of the myth of Melusine. She is sometimes depicted with two tales, as in the Norse image taken by Starbucks; sometimes only one. This is one iteration of her myth.

The fairy, Melusine, was the daughter of the fairy Pressyne and King Elynas of Albany. She became the fairy Queen of the forest of Colombiers in the French region of Poitou. One day, she and two of her subjects were guarding their sacred fountain when a young man, Raymond of Poitiers, burst out of the forest. Melusine spent the night talking with Raymond, and by dawn, they were betrothed, but with one condition. Melusine requested that Raymond promise that he would never see her on a Saturday. He agreed, and they were married. Melusine brought her husband great wealth and prosperity. She built the fortress of Lusignan so quickly that it appeared to be made by magic. Over time, Melusine built many castles, fortresses, churches, towers and towns, each in a single night, throughout the region. She and Raymond had ten children, but each child was flawed. The eldest had one red eye and one blue eye, the next had an ear larger than the other, another had a lion’s foot growing from his cheek, and another had but one eye. The sixth son was known as Geoffrey-with-the-great tooth, as he had a very large tooth. In spite of the deformities, the children were strong, talented and loved throughout the land.

One day, Raymond’s brother visited him and made Raymond very suspicious about the Saturday activities of his wife. So the next Saturday, Raymond sought his wife, finding her in her bath where he spied on her through a crack in the door. He was horrified to see that she had the body and tail of a serpent from her waist down. He said nothing until the day that their son, Geoffrey-with-the-great tooth, attacked a monastery and killed one hundred monks, including one of his brothers. Raymond accused Melusine of contaminating his line with her serpent nature, thus revealing that he had broken his promise to her.

As a result, Melusine turned into a fifteen-foot serpent, circled the castle three times, wailing piteously, and then flew away. She would return at night to visit her children, then vanish. Raymond was never happy again. Melusine appeared at the castle, wailing, whenever a count of Lusignan was about to die or a new one to be born. It was said that the noble line which originated with Melusine will reign until the end of the world. Her children included the King of Cyprus, the King of Armenia, the King of Bohemia, the Duke of Luxembourg, and the Lord of Lusignan. 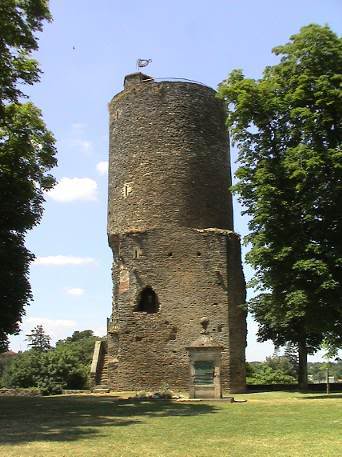 Said to have been built in a single night.


There is an intriguing association between water serpent myths and round towers found all over the world.

Like pyramids, circular towers of stone are found on both sides of the Atlantic. The common figure linking these structures, however, proves to be the serpent or snake. Cultures as diverse as the Celts of Ireland and the Hopi of Arizona associate this religiously and psychologically charged reptile with round temples reaching toward moisture-laden storm clouds.

Over 65 towers of exquisite masonry, many rising over 100 feet high, dot the green countryside of Ireland. The monasteries of Monasterboice, Domhnach, and Kilkenny were all built adjacent to earlier round towers. Some researchers claim these commanding structures were fire temples dedicated to sun worship. Why, then, are round towers frequently located next to healing springs or holy wells issuing from the subterranean realm over which the snake rules?

how do you do this to me? where do i begin? i am dumbfounded on this one.

and, btw, do you know that you can only buy that 'fully-nekkid' slutbuck coffee cup and paraphenilia at the orginal shop in Seattle. my brother-in-law brought one back for me. ceramic.

This was fascinating! Come checkout my post on Melusine on my Baby name blog!