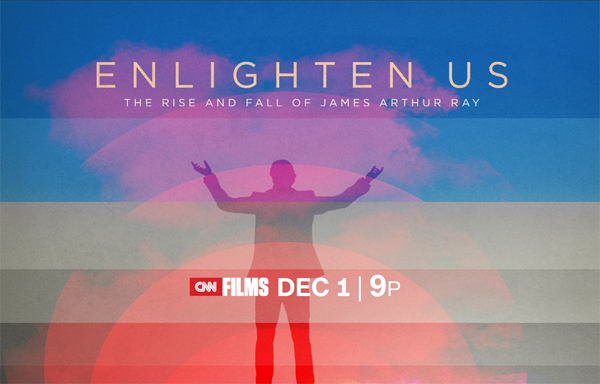 Set your DVRs, folks. CNN will air Enlighten Us, the James Ray documentary of dubious quality I wrote about here. The details can be found on the CNN website.

ENLIGHTEN US: The Rise and Fall of James Arthur Ray, directed by Jenny Carchman, will premiere Thursday, Dec. 01 at 9:00pm and 11:00pm Eastern on CNN/U.S., with limited commercial interruption, the network announced today.  ENLIGHTEN US made its world debut at the 2016 Tribeca Film Festival in New York City in April and also screened at Telluride Mountainfilm in Colorado and Tallgrass Film Festival in Kansas.

The film explores the story of the motivational speaker’s meteoric rise, fall, and attempt to return to the $11 billion personal growth industry following his conviction for negligent homicide in the deaths of three of Ray’s clients at one of his events.  The film explores the origins of the self-help industry, what followers of the industry are looking for, who is offering answers to those followers, and why some are willing to risk so much for that guidance.


In other news, Ray doesn't want to be a convicted felon anymore. Connie Joy has learned that he is petitioning the court to set aside the verdict that put him in prison briefly, for the small matter of killing three people.

Comments on this entry are closed, on this blog. If you wish to comment, please find this and all newer blog entries crossposted on Celestial Reflections.
Posted by LaVaughn at 10:46 PM