Ancient Gnostic Culture on the Brink in Iraq

As I said early on in this fiasco in Iraq, in addition to the pointless waste of human life, we are destroying history itself.

Much as I'd feared, the war resulted in the loss of many archaelogical artifacts. Now I know Donald Rumsfeld will think I'm going all Henny Penny over this trifle, but I do take the loss of history, going back 7,000 years seriously. Although, in fairness, the oil is safe, and it is, technically, much, much older.

In today's New York Times op-ed section, a plea for the protection of the Mandean culture.

The Mandeans are the only surviving Gnostics from antiquity, cousins of the people who produced the Nag Hammadi writings like the Gospel of Thomas, a work that sheds invaluable light on the many ways in which Jesus was perceived in the early Christian period. The Mandeans have their own language (Mandaic, a form of Aramaic close to the dialect of the Babylonian Talmud), an impressive body of literature, and a treasury of cultural and religious traditions amassed over two millennia of living in the southern marshes of present-day Iraq and Iran.

Practitioners of a religion at least as old as Christianity, the Mandeans have witnessed the rise of Islam; the Mongol invasion; the arrival of Europeans, who mistakenly identified them as “Christians of St. John,” because of their veneration of John the Baptist; and, most recently, the oppressive regime of Saddam Hussein, who drained the marshes after the first gulf war, an ecological catastrophe equivalent to destroying the Everglades. They have withstood everything — until now.

This op-ed caught my eye today, in part I think, because I've been reading up on the Gnostics again lately. It's an area of study I keep colliding with because of its overlap with other cosmologies that interest me. A good resource is The Gnosis Archive. (Don't worry. I'll be adding it to the blogroll shortly.)

Because of this damned war, we are on the brink of losing a living link to antiquity. For a little more insight into the relevance of this cultural heritage and the Nag Hammadi scriptures, go here.

An older Counterpunch article, appropriately entitled, "The Plight of Iraq's Mandeans," explains a bit about their belief system.

In the newsmedia, the Mandaeans are sometimes referred to as being devoted "to the teachings of John the Baptist" (7). This is accurate but misleading, not only because Mandaeans insist that theirs is the religion of Adam, but also because they have their own scriptures containing their own account of John the Baptist which disagrees with much of the Christian Bible's depiction of the man. There are, furthermore, many elements of the Mandaean religion which Christians, as well as Muslims and Jews for that matter, would find alien (1, 2).

The Mandaean religion resembles ancient Gnosticism in some respects: God did not create the world directly, but delegated its creation to deputies who made both a superior world of light and an inferior darker world in which humans live, it being impossible to create a world of light without also creating a world of darkness. Salvation is the successful transition to the world of light after death. Many early Christians were Gnostic, but such ideas were also condemned in the early Church as well, and by the time of the Emperor Constantine, Christian Gnosticism was quite marginal. It did not survive very long in the West. It is a testimony to the traditional tolerance of Islam that a Gnostic or quasi-Gnostic religion, in the form of Mandaeanism, was able to survive throughout the medieval Middle East and into modern times, although I do not mean to imply that it was always easy for it do so.

With the ascent of Islamic fundamentalism, in Iraq, Mandeans, like many minority sects there, are being forced to convert, young women forced into marriages with Muslim men. In short, we are witnessing yet another cultural genocide as a result of our imperialism.
Posted by LaVaughn at 6:01 PM 2 comments:

Massacre of Buddhist Monks in Burma 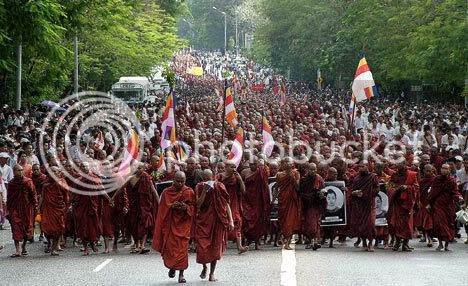 The peaceful protest led by Buddhist monks against the regime in Burma (Myanmar) has been suppressed in a violent bloodbath.

Thousands of protesters are dead and the bodies of hundreds of executed monks have been dumped in the jungle, a former intelligence officer for Burma's ruling junta has revealed.

The most senior official to defect so far, Hla Win, said: "Many more people have been killed in recent days than you've heard about. The bodies can be counted in several thousand."

Mr Win, who spoke out as a Swedish diplomat predicted that the revolt has failed, said he fled when he was ordered to take part in a massacre of holy men. He has now reached the border with Thailand.

In what has been termed the "Saffron Revolution," thousands of Buddhist monks have been leading peaceful marches against the country's military regime.

On September 23, as many as 100,000 anti-government protesters led by a phalanx of Buddhist monks and nuns marched through Yangon (Rangoon), the largest crowd to demonstrate in Myanmar since 1988. Next day, tens of thousands more monks, joined by civilians, marched peacefully through key areas of several Burmese towns. Indeed, since late August this year, monks and people around Burma have been out on the streets protesting against a sharp hike in fuel prices imposed by the dictatorship on a long suffering people, among the poorest in the world.

The protests were initially triggered by student activists, who, lacking the immunity accorded to monks, were immediately beaten up and detained. Min Ko Naing, a student leader and hero of the 1988 failed uprising against the military regime, who has already spent nearly a decade-and-half in jail, was among those arrested.

Today, reports from inside the country are declaring the uprising over and the military junta in control.

Reports from exiles along the frontier confirmed that hundreds of monks had simply "disappeared" as 20,000 troops swarmed around Rangoon yesterday to prevent further demonstrations by religious groups and civilians.

There, troops abandoned religious beliefs, propped their rifles against statues of Buddha and began cooking meals on stoves set up in shrines. 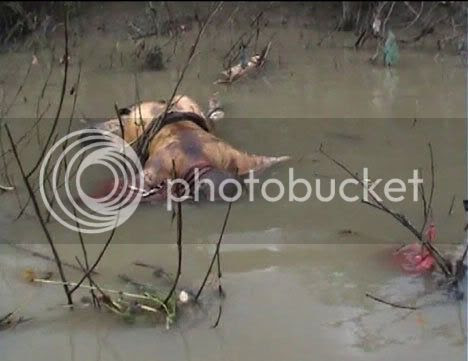