I only just stumbled on this incredibly brilliant show. It used to appear on YouTube, but now has an exclusive deal with Crackle. This is unfortunate because Crackle's players are not nearly as user-friendly or functional as YouTube. For the second season, though, you have to go here.
Posted by LaVaughn at 10:54 AM 2 comments:

Lying fallow on the third floor, above shops and a travel agency, is a Masonic Temple built in 1923, but lost in a sheriff's sale in 1953; a sort of archaeological find in the business district of Manasquan NJ.

Standing in the Manasquan temple Friday, Goldstein said the room was designed to be a representation of the temple of King Solomon.

The two columns, one topped with a globe and another with an orb depicting stars, would traditionally be placed on either side of a door that was only used by candidates for Masonry. The candidates would have to walk through the door and between the columns three times during their initiation process, he said.

The Masons use symbols traditionally used by builders, including the square and compass, to teach moral lessons such as to "square your actions," Goldstein said.

The Manasquan temple was used by both the Royal Arch chapter and Wall Lodge 73 of the Masons until the group hit financial hard times during the Great Depression.

The temple's carved mahogany furnishings, Goldstein said, bear the same inscriptions as the temple walls and can now be found in his Spring Lake Heights lodge. Over the years, the lodge has taken in the remnants of Wall Lodge 73 and others from Spring Lake, Ocean Grove and Belmar and now has 300 members.

Rutkowski said the third floor's large room would have been used for regular membership meetings and the conferring of degrees to members.

"It's still well-preserved. It's a beautiful area," he said of the temple.

However, when asked about the meaning of the hieroglyphics on the walls, Rutkowski said, "I really don't know if I can tell you that. Some of that stuff I can't even read. It's the cryptic part of the Masons."

But, he added, "It's all scriptural, it's all out of the Bible." 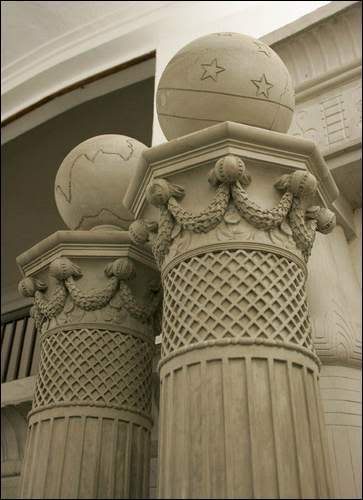 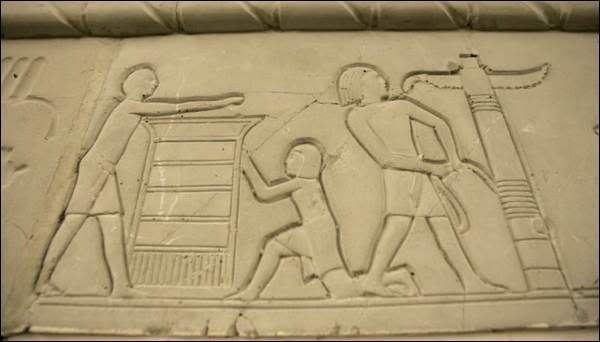 So is there any hope of restoring this lovely bit of history? Sadly, it doesn't look promising.

There was even some talk a while back of turning the building's third-floor hallway into a Masonic history museum in an attempt to raise funds to restore the temple, all to no avail, she said.

The Masons "would love to restore it, but we don't have the funds," Rutkowski said. "Someday, we might, but at this point it would just be a dream."

The Breathtaking Grandeur of Global Warming

In today's Times a bittersweet contemplation on the Patagonia glaciers as seen from the deck of a disco blasting cruise ship.

The pieces of ice in the water around us are now larger; their shapes are mesmerizing, as are their colors, varying shades of an intense, crystalline blue that I’ve never before seen in nature. As if we were children watching clouds float through the sky, we start pointing out ice in the shapes of whales and giraffes, or fallen columns; the larger icebergs, showing only 15 percent of their incredible mass above water, look like ruined temples and amphitheaters.

We come in sight of the first glacier and it is strange and magnificent, a frozen river of jagged peaks. Water pours off the sides. Glaciers worldwide have been receding for more than a century, but the melting has accelerated catastrophically in the last few decades. The tree line has not had time to advance enough to catch up; the ice has left behind wide scars of bare, hardscrabble earth. All the glaciers in Patagonia save one are shrinking more rapidly every year.

To my teenage niece, who has unplugged herself and joined me on deck, I explain all the science of climate change I can muster. Every once in a while a thundering crack is audible over the human din, as a huge piece of ice breaks off the face of the glacier. By the time you’ve heard it, you’ve missed it, and can see only the widening ripples radiating from the water where the newly calved iceberg has fallen. We watch melting ice cascade off the glacier’s crenelated face. “I guess this gives new meaning to ‘a glacial pace,’” my niece remarks.

I try to imagine what it must have been like to see glaciers looming 19 or 20 stories above, as the guide puts it, from a small, fragile craft, rather than from our three-story-high cruiser, and then I realize how strange it is that we resort to the architectural measurements of skyscrapers to wrap our minds around such grandeur. Getting to the glaciers in a small boat as a backpacker might have done a mere 20 years ago is now a privilege reserved for the very wealthy. Our cruiser cannot get too close for fear of a chunk of ice breaking off and sinking it — in revenge?

So, how rapidly are the glaciers pitching bits of themselves into the ocean? According to NASA research, so quickly that the melt is a significant cause of rising sea levels. It is this "calving" process that makes their melt so rapid and it's impact so great.

The Patagonia Icefields of Chile and Argentina, the largest non-Antarctic ice masses in the Southern Hemisphere, are thinning at an accelerating pace.

They now account for nearly 10 percent of global sea-level change from mountain glaciers, according to a new study by NASA and Chile's Centro de Estudios Cientificos.

NASA scientists have concluded that the cause of glacial retreat is climate change, as evidenced by increased air temperatures and decreased precipitation.

Still, those factors alone are not sufficient to explain the rapid thinning. The rest of the story appears to lie primarily in the unique dynamic response of the region's glaciers to climate change.

The Patagonia Icefields are dominated by 'calving' glaciers, that spawn icebergs into the ocean or lakes, and have different dynamics from glaciers that end on land and melt at their front ends.

Calving glaciers are more sensitive to climate change once pushed out of equilibrium, and make the Patagonia region the fastest area of glacial retreat on Earth.

But they sure are beautiful.