Battlestar Galactica: The Conclusion (With Spoilers) 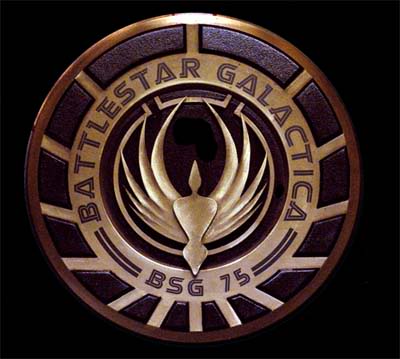 “A science which does not bring us nearer to God is worthless.” ~ Simone Weil


The take-away from the "Battlestar Galactica" finale is that technological advancement, at the expense of spirituality, dooms us to an endless cycle of cataclysm and destruction. In looking through the reviews, I see that some don't know quite what to make of that conclusion.

The finale could have been all about failed hopes, dreams, lives. But Moore chose a much sunnier - and arguably more overtly religious - ending. I found that somewhat surprising even though the religious overtones had always been there. Hell, you don't have something called Resurrection without Biblical overtones, much less references to "gods" and a "one true god." These issues were always in play - and "BSG" always got critical credit for tackling them when most writers wouldn't go near it, other than in some darkly metaphorical way. But to have many of the key final twists and explanations come down to what can best be described as divine intervention was, for me, very much unexpected. Stunning, even.


I, myself, was somewhat surprised at how overt the spiritual message was at the end, but for me, the esoteric elements of the show have been among it's most compelling features. My original post on the spiritual and mythical thrust of the show is here.

In the concluding episodes, we saw the introduction of still more spiritual themes, including references to "angels." The possibility that this ties in to "Galactica 1980" is discussed here, and is probably one of those things that will be discussed and debated by fans, for years to come.

But, after the last episode, it's clear that for whatever else Starbuck was, her return from the dead was in angelic form. She, indeed, had a "special destiny" and it was to lead the survivors, human and cylon, to the new earth. But, Starbuck was only one of the players who was "dialed in" to a higher plan. Starting with Laura Roslin, whose use of kamala extract allowed her to pierce the veil and tap into the Pythia prophecies, these glimpses of supernatural intervention underscored the narrative, from the outset.

I should note here, because I failed to do so in my original BG entry, that Kamala is a Hindu name and means lotus. (It is also, it would appear, one of the names for the Goddess Laxmi.) The association of the lotus with spiritual enlightenment, and with the god-head itself, appears in many myths; notably Buddhist, Hindu, and Egyptian. I wrote a bit about my own strange journey with the mythical lotus here.

In the final season, the division between the spiritual and purely analytical came into sharp relief. The show's lone atheist, Cavil, is revealed to be hostile, not only to humans, but to his own humanoid form. 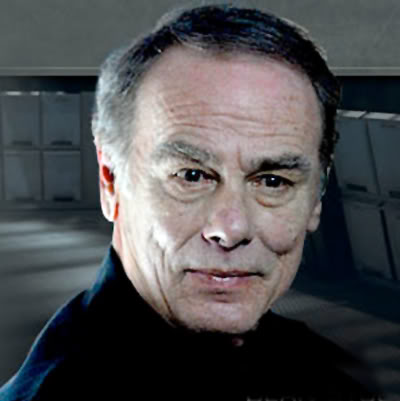 Cavil: The name means "to quibble." But, it derives from the Latin calvi, which means "deception," as in "calumny." I would not be surprised if it is this darker aspect that the writers were alluding to, with the name. Dean Stockwell has done some of the finest work of his career in "Battlestar Galactica." Cavil is a perfectly drawn character; his rage cool, measured, and methodical. Only in flickers do we see the petulant, disappointed child, driven by hatred for the mommy who has doomed him to a life he thinks imperfect and foolish. In the brilliant "No Exit," (Season 4, Epicode 15) he confronts Ellen, fifth cylon and progenitor of the seven cylon models with his contempt for her effort to build bridges between humans and machines. In this final season he emerges as a bitter saboteur, whose disdain for the all things human -- emotion, irrationality, spirituality -- is a key motivation.

In the climax of the final episode, we see these two operating principles collide when Gaius Baltar and Caprica Six find themselves in the opera house, and the final five above them, just as they were in the dream they have shared with Laura Roslin and Athena, repeatedly. There, the final battle over Hera plays out on what is actually the CIC of Galactica. Baltar, who the New York Times aptly compares to none other than Joseph Smith, pleads the case for a broader spiritual vision, to a recalcitrant Cavil.

“Whether we want to call that God or Gods or some sublime inspiration or a divine force that we can’t know or understand doesn’t matter,” he says. “God is a force of nature beyond good and evil.” 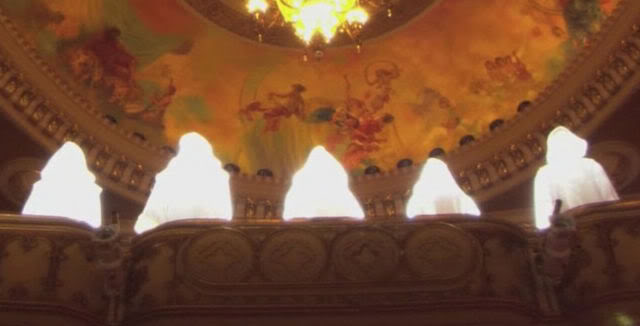 And so, this mysterious force that has revealed glimpses of its divine workings in sacred scrolls, dreams, visions, hallucinations, and the from-the-gut decisions of inspired leaders, takes them to their conclusion and new beginning. The show leaves us with no question that neither spirituality, nor pragmatic science is enough. The duality represented by cylon and human forms, and merged in their hope for the future, Hera, is the necessary balance to break the cycle of destruction that has typified human history as we know it... and as we may not.
Posted by LaVaughn at 10:22 AM No comments:

I've put together playlists of several interviews with Graham Hancock about his book Supernatural. All threee interviews are excellent and informative. In them, he shares his experiences with the use of ayahuasca and other psychotropes, under the care of traditional shamans and other healers. He also explains his belief that shamanic, altered consciousness experiences underpin all the world's great religions and advocates that individuals have the freedom and encouragement to experience the boundaries of consciousness and explore the spirit world for ourselves.

The final interview with Conscious Media Network is also available for viewing in their free archive. It's the shortest of the interviews at just under a half hour.
Posted by LaVaughn at 1:04 PM No comments:

Email ThisBlogThis!Share to TwitterShare to FacebookShare to Pinterest
Labels: Shamanism

Karen Bishop posted this on Thursday. You'll note, I've only just now gotten 'round to posting any mention. That sums it up fairly well. Yawn. I don't care about anything.

Bit by bit, piece by piece, we are starting over. After enough souls residing in the lower dimensional old world, had been given enough time and opportunity to choose if they would stay behind or move on to their newer and higher vibrating reality of the next step for the whole, many of us then left for the next rung of our very new reality. When we left, we may have felt a great completion, a sense of loss of identity and purpose, and perhaps great feelings of no sense of place. We were done with a very important phase, and because this phase was completed by enough of the whole, we were most certainly done with a very important mission. This was a huge completion. Because we are very done, we are now readying to start over…to experience a grand rebirth, and some very new beginnings.

Moving into a higher vibrating reality creates common themes that are always present. Some include: A very low tolerance for lower vibrating energies and ways of being, great loneliness, memory loss, a strong feeling of no sense of place, a great dis-connect from much of everything, extreme fatigue and feelings of not wanting to do anything but rest, apathy, sleepiness, mood swings, great joy, peace, a deeper connection to Source and our souls, greater feelings of love, and a very strong awareness of what is around us.

Bishop's last couple of posts have been dead-on accurate for me. All I want to do is rest and I don't feel well rested or relaxed no matter what I do. I feel thoroughly exhausted. (Note to self: I keep meaning to burn to some benzoin, for psychic and emotional exhaustion, but I keep forgetting. Probably because I'm exhausted.) All I want to do is sleep, read, and watch movies. Most of today, you'll find me on the comfy couch with my daughter watching the Harry Potter marathon on ABC Family. The commercials will drive me bonkers, but, eh, what are ya gonna do. The remote is way over there.

Oh, here's a thing. Is anyone else having problems with electrical things: power fluctuations, batteries and other power sources becoming erratic, bulbs burning out like mad, electronics breaking or malfunctioning... I am. I'm also having some very strange energy surges in my body, and I don't think the two things are unrelated. Over the past couple of weeks, I keep fluctuating between being exhausted, but unable to sleep for more than a few hours at a time, and then days when I'm practically narcoleptic.
Posted by LaVaughn at 10:08 AM No comments: