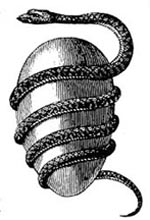 ineffable, hidden, brilliant scion,
whose motion is whirring,
you scattered the dark mist
that lay before your eyes and,
flapping your wings,
you whirled about,
and through this world
you brought pure light. 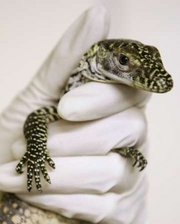 The hotly anticipated Komodo Quints have made their debut. Reports of the virgin mother komodo started circulating this holiday season, in coordination with the birthday of another famous virgin-born child, Jesus. They didn't quite make it in time for Christmas, but they cracked their eggs on January 15th. Babies and mother Flora are reportedly doing fine at Chester Zoo in Great Britain.

Other reptile species reproduce asexually in a process known as parthenogenesis. But Flora's virginal conception, and that of another Komodo dragon earlier this year at the London Zoo, are the first time it has been documented in a Komodo dragon.


Flora joins a proud tradition of virgin mothers, long predating the Madonna. Virgin birth is a recurring theme in goddess traditions from around the world.

Crishna was born of a chaste virgin, called Devaki, who, on account of her purity, was selected to become the "mother of God."

Doane, Bible Myths and Their Parallels in Other Religions
A recurring theme in ancient religion revolves around the manner of the sun god's birth, as well as the chastity of his mother. In a number of instances the sun god is perceived as being born of the inviolable dawn, the virgin moon or earth, or the constellation of Virgo. The virgin status of the mothers of pre-Christian gods and godmen has been asserted for centuries by numerous scholars of mythology and ancient religion.

Buy at AllPosters.com
And, curiously, the mother goddesses of ancient mythology have long been associated with serpents.


Serpents were commonly connected to the Mother Goddess; however, the reason for this connection is still quite unclear. It can be seen around the world in such examples as a Gorgon. Notice that the common dragon slayer myths often include a woman to be saved by the valiant knight.10

The theory today states that the societies with a more patriarchal worship came down through the Mediterranean area, where many of the Mother Goddess cults remained, and changed the culture through war and conquest. This can account for the many dragon slaying myths that have been recorded.11 The most common format for the story is something like this: An evil dragon scourges the land, a valiant knight takes up the charge of killing the dragon, and he slays the dragon and wins a bride or saves the virgin sacrifice. While some interpretations may vary, the knight is generally a symbol of all that is good, while the dragon is a symbol of corruption. The knight, which represents the new conquering culture, should be revered by the people while the dragon, which represents the Mother Goddess of the past, should be hated. What is left of the symbolism of women? Well, she's either give over as a prize, or she is a virgin saved by the knight.12
Even before Christianity, the Mother Goddess was devalued. However, she was not tossed aside entirely. There was still a need for a mother figure in religion; her complete "overthrow" did not fully take place until the Christians took their toll upon the religions.13 In the end, the people were left with two major role models for women: the Virgin Mary and Eve.14
Connections between women and serpents and dragons are everywhere. Tiamat was slain by Marduk, a male god. Eve was tempted by a snake; the Gorgons had hair that was writhing with snakes. Apollo slew Python, a serpent of terror. The saints commonly slew dragons to save maidens. Countless connections can be made between dragons and the view of women.15

Serpent lore lies at the heart of creation myths in ancient civilizations all over the world from the Naga Serpents of the Hindus to the snake mounds of the Americas to the great stone circles of Europe.

Now in another twist in the tale of the serpent I uncover one of the ancient truths about dragons, remembering that in myth and in ancient history, dragons and serpents are intertwined like the coils of a pit viper....

Avebury is a huge British Temple and stone monument erected around 2,000 BC in the shape of a serpent when seen from the sky. Once known as Abury which according to Deane [2] is evidently Abiri or Ab-ir (after the Abiri people or Cabiri who were serpent worshippers). Abir incidentally means the solar snake or fire snake.

Although some have argued whether Avebury should ever have been Abury or Aubury (serpent sun) the fact remains that even as far back as the 17th century there was a Mr Aubury who said himself that it should be pronounced and spelt Aubury (found in the legier-book of Malmesbury Abbey.)

Of course even as Ave Bury, the ‘Ave’ reverts back to the root of ‘Eve’ which we know means ‘female serpent.’ The pathway of Avebury passes through a large circular Temple of the sun emerging and then winding again and ending with an oddly, not quite circular head – directly in line with ‘Snakes Head Hill’ (Hackpen.) The central circle is symbolic of the sun, which is the male principle in the creative process and is symbolized elsewhere as a bull or lion. Once the serpent has passed through or around this sun circle it is recharged for new life.

And so we come full circle. 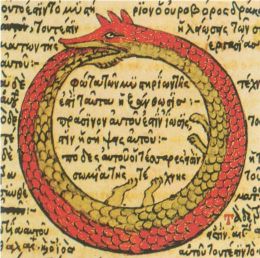