Is Pope Francis Too Soft on Pedophile Priests? 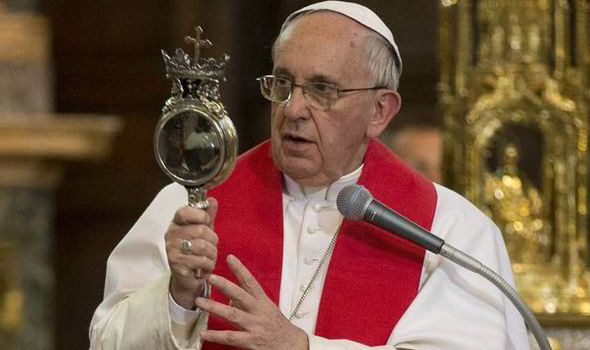 Over the weekend, I read that Pope Francis is backtracking on pedophile priests, trimming their sentences and showing them "mercy." I was saddened. I am not Catholic. I have never particularly "liked" a pope, but there is much about this one that I admire. I like that he takes his vows of poverty seriously. I like his compassion for the poor and disenfranchised. I like that, although he has not significantly changed Church policy on LGBT issues, he has urged compassion and lack of judgment. I have not cared for his stance on women in the priesthood and I have not been impressed with the pace or tenor of his approach to the sex abuse crisis. So when I saw these words, my heart sank.

Pope Francis has quietly reduced sanctions against a handful of pedophile priests, applying his vision of a merciful church even to its worst offenders in ways that survivors of abuse and the pope’s own advisers question.


Worse, his leniency has already backfired, according to the article.

One case has come back to haunt him: An Italian priest who received the pope’s clemency was later convicted by an Italian criminal court for his sex crimes against children as young as 12. The Rev. Mauro Inzoli is now facing a second church trial after new evidence emerged against him, The Associated Press has learned.


But the more I read, and I read several articles, the less substantive this story seemed to be. The new charges against Rev. Inzoli appeared to come from new information, not from re-offense. In fact, there is no evidence that these changes have put any children at risk.

Yesterday James Ray went before a judge to argue that he was unfairly burdened by his felony conviction and that it should be set aside. But unlike the recent documentary Enlighten Us, that enabled Ray to play the victim without challenge or rebuttal, the judge allowed the family members of his victims to speak. It did not go his way. Some of his civil rights were restored, but his conviction was not vacated and his travel restrictions remain in place.

A victory and a defeat for convicted self- help entrepreneur James Arthur Ray.

A Yavapai County Superior Court judge restored Ray’s civil rights, except his right to carry a gun, but he denied Ray’s request to have his convictions set aside.

Ray told the judge he wanted his convictions set aside because the international travel restrictions on him were limiting his ability to rebuild his self-help enterprise.


In James Ray's alternate universe, his work was never on trial. (It was.) And his conviction for "negligence" means he didn't kill anyone. (He was convicted on three counts of negligent HOMICIDE.)