I recently added the "Battlestar Galactica" series on DVD to the bookstore. I think this merits a little explanation. Why would I place a science fiction series about a multi-generational battle with mechanoids in my little new age book shop? Well, for starters, it's one of the best written, directed, and acted, series in television history -- easily on par with that other transcendent bit of programming "The Sopranos." More to the point, some of the themes lend themselves to a range of philosophical and metaphysical discussions.

Much has been written about the political themes in the series. Less so about the religious, spiritual, and mythical themes.

Some of the spiritual themes owe to the source material; the original series which has been fairly described as "Star Wars meets Wagon Train." There are not many similarities to the painfully campy show... well, except for the basic storyline, characters, and a curious homage to mythology; largely, but not entirely, Greek.

The name of the 12 colonies, collectively, is Kobol, "an anagram of Kolob, which, according to the Mormon Book of Abraham, is the star nearest to where God dwells." This owes to the Mormon background of the creator of the original series Glen Larson. The names of the colonies themselves are renderings of the 12 zodiac signs: Caprica, Aquaria, Scorpia, etc. The character names are like a listing from a world mythology class syllabus: Adama (Adam), Apollo, Athena, etc.

From the departure point that was the original show, the new series has moved in some surprising directions and impressed viewers and critics alike with its depth. This is as much the case with the mythological themes as other elements. The central conflict of the show is between the human survivors and their Cylon attackers. But there is also a religious conflict between these two civilizations; the polytheistic beliefs of the humans and the monotheism of the Cylons. But humans and Cylons alike are possessed of spiritual visions and intuitions regarding their shared destinies. These visions, rich in familiar archetypal resonances and shamanic devices, lend a particular gravity to the series.

In the first season, the accidental President of the Colonies Laura Roslin (Mary McDonnell), who is taking an herbal compound called kamala extract as a cancer therapy, begins to have strange dreams and "hallucinations." At one point during a press conference she sees snakes writhing on the podium. She later learns that her "hallucination" of the snakes is a vision prophesied by the "Pythia." The name Pythia is, of course, that taken by the Oracles of Delphi in ancient Greece. There are many versions of the mythological underpinnings of the Oracle of Delphi. At least in latter iterations, it was the temple of the Apollo who, legend has it, slew Python (Pytho, Delphyne), the great dragon.

The Pythia was the priestess presiding over the Oracle of Delphi while it was the temple of Apollo, located on the slopes of Mount Parnassus. The Pythia was widely credited with giving prophecies inspired by Apollo, giving her a prominence unusual for a woman in male-dominated ancient Greece, but given the probability that she was first an oracle for the goddess, Gaia, who was the Great Goddess, Earth, the presence of priestesses at the oracle of the goddess would have been typical in archaic times. The name of Themis is often used to identify the Pythia. In earlier myths, Themis built the Oracle at Delphi and was herself oracular. According to another legend, Themis received the Oracle at Delphi from Gaia and later gave it to Phoebe.


Gaia was also a great dragon, akin to the Sumerian Tiamat. (For more information on the correlation between creation myths, goddesses, and reptiles, scroll down to here.)


But the allusion to the Pythia myth is not an idle one. According to legend the Oracle of Delphi exposed herself to an hallucinogen. Seated on a tripod she breathed a vapor that was said to emanate, through a crevice in the earth, from the rotting corpse of Python. It was more likely ethylene gas. In Laura Roslin's case it is kamala extract. But the use of hallucinogens in spiritual practice is an ancient one. According to Graham Hancock's Supernatural, it may date back to the stone age, as evidenced by shamanic themes in paleolithic cave art. So called "hallucinations" are a method of "piercing the veil" and revealing the hidden, but very real, world.

But in "Battlestar Galactica," the Cylons are also capable of shamanic experiences. We discover this most poignantly when one of the Number Threes (Lucy Lawless) undertakes repeated death/rebirth experiences to learn what lies between the worlds.

In the season that just ended, we learn more about the visions of Kara Thrace, call-sign Starbuck (Katie Sackhoff). Thrace, by the way, is an ancient country, now absorbed in part by Greece, that was between the Black Sea to the Aegian. We learned a while ago that Starbuck had a "special destiny," of some kind, known to the Cylons. In more recent episodes we discover that she has been painting a symbol over and over for years that very much resembles what they refer to as the "Eye of Jupiter." 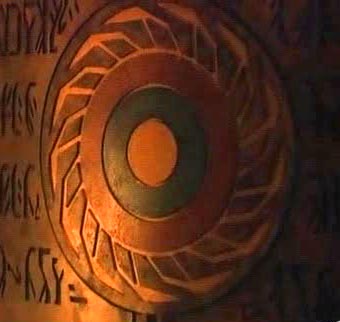 See here for some background on the geometry and symbolism of eyes and why they speak to something seminal in our consciousness. This particular image of spheres within spheres is one that has entranced me for years. I thought seriously at one time about doing a giant canvas of that image. I never got around to it, and frankly, I'm not much of a painter. But the following image looks very similar to what I saw in my head for a period of years. Stare at it for a while. It's hypnotic.


There is much to say on this fantastic show, but not much more that I can relate that won't divulge its intricate plotting. I do not mean this to be a spoiler review. To my sorrow, the newest season just wrapped and there will be no new episodes until 2008. Can't wait.
Posted by LaVaughn at 9:24 AM